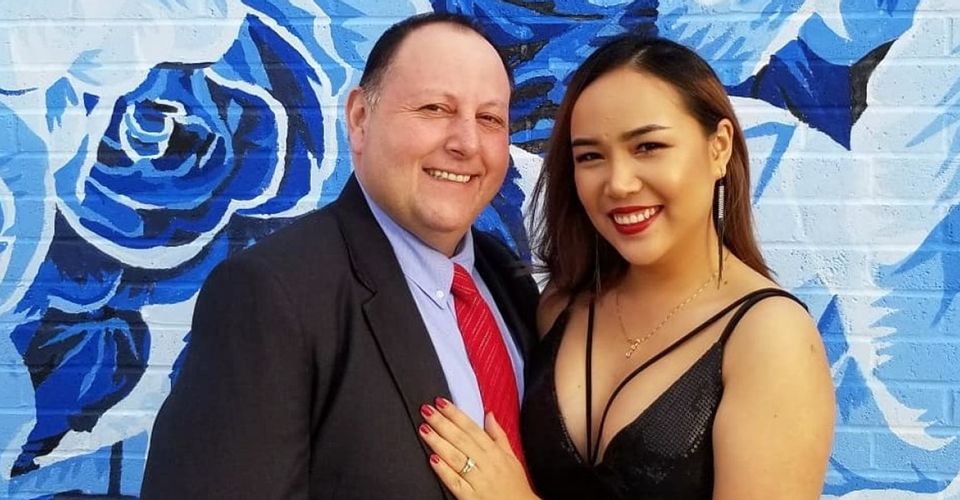 Since the premiere in 2014, 90 Day Fiancé has introduced audiences to dozens of romances- some of which fared better than others. From the most polarizing couples to some of the most beloved, here is a complete breakdown of which couples have stayed together. While many fan favorites made the list, other polarizing couples might surprise fans.

The original TLC series spurred nearly a dozen spin-off shows due to its popularity. 90 Day Fiancé chronicles Americans who have their foreign partner join them in the U.S. on a K-1 fiancé visa. While many couples went through with their marriages, a number of relationships ended with divorce and drama. The following article will focus on couples from season 1 to 7 of the hit show that started it all. Since season 8 is currently airing, the statuses of the most recent 90 Day Fiancé couples cannot yet be confirmed, as many cast members are playing it coy when it comes to their current relationship status.

While many couples in the franchise are still happily wed, Russ and Paola join the rest of the season 1 couples who saw success in their relationships. Oklahoman native Russ and Columbian fitness-enthusiast Paola are still married and share a two-year-old son Axel who was born on January 1, 2019. Paola is currently the breadwinner of the family and is a popular influencer on Instagram.

Ohio native Mike and Russian beauty Aziza are another successful season 1 couple. They remain happily wed and welcomed daughter Olivia Joan to the world on January 14, 2019- just under two weeks after Russ and Paola welcomed their son.

Though the COVID-19 pandemic kept them apart for some time, Alan and Kirlyam are now happily reunited and together. The season 1 couple shares son Liam, who was born on October 6, 2017. The Brazilian beauty and her California husband have apparently found lasting love and formed a happy family together.

Rounding out the season 1 couples is Louis and Aya. Like their fellow cast members, they are still wed and are parents as well. The couple welcomed their first son Giovanni to the world in June 2018 and their second son Stefano this past November. That means that all of the original cast have been happily married for approaching seven years.

Only half of the season 2 couples ended up together, but Justin and Evelyn are still happily wed. The California man and his Columbian wife ended up with a happy story, as Evelyn became close to Justin’s family despite initial tensions. Formerly known as “Evelin,” the Colombian beauty has since changed the spelling of her name to “Evelyn,” which is more common in the U.S. The couple welcomed a baby boy on September 1, 2020.

Melanie and Devar from season 3 are lucky they met while Melanie was vacationing in Devar’s native Jamaica because the couple is still together. They welcomed their daughter Avah in November 2017 and remain happily married despite initial relationship issues.

Fernando and Carolina are another successful season 3 couple. The Floridian and Columbian are still married despite a problematic relationship. Fernando put on a considerable amount of weight after meeting his Columbian love and was in hot water for exchanging emails with his ex. However, he maintained that he never cheated and the couple is still together.

Rounding out the list of season 3 couples who are still together is Josh and Aleksandra. The Russian-American couple is still happily married and is living in New Orleans, where Josh works as a hospital resident. The couple shares two children and previously lived in Australia together.

When it comes to the first season 4 couple on the list, Nicole and Azan do not have as straightforward a love story as their fellow castmates. The couple faced an indefinite wedding delay due to Nicole not earning enough to sponsor Azan’s visa. They remained together while apart and came back in season 5 for more drama. The couple still hasn’t wed and has led to a confusing relationship, though they are believed to be still together.

Danny and Amy’s fateful Bible study trip meeting was truly a blessing, as the couple remains happily married. They currently reside in Texas with 5-year-old son Jedidah and 3-year-old Anna. The South African beauty is currently pregnant with the couple’s third child.

Rounding out the list of season 2 couples who are still together is Brett and Daya. The American and Filipina are still happily together. Along with Brett’s daughter from a previous marriage, the couple shares three-year-old daughter Isabelle. The happy parents have overcome past hardships to lead a successful married life together.

Out of all of the couples on the list, Mark and Nikki’s relationship is the hardest to confirm. However, if they are still together, then that would mean every season 3 couple saw a happy ending. The problematic couple allegedly sued TLC for portraying them in a negative light, and little has been heard from them since. Neither are active on social media, though fans have alleged that they saw the couple together as recently as 2018.

Kyle and Noon, on the other hand, are most definitely still happily together. The couple, who met through Facebook, are still married and very much in love. Noon even helped Kyle repair his relationship with his mother.

Season 3 couple Loren and Alexei, who met while Loren was taking a Birthright Israel trip, are not only still happily wed, but they are parents to a baby boy. Loren gave birth on April 14, 2020, and the couple currently resides in Florida.

The Nigerian and American met on a dating service for plus-sized women, and this season 4 couple’s story had a happy ending. Narkyia and Olulowo are a happily married couple living in the United States who welcomed their first child together last year.

Matt and Alla are one season 4 couple who have a happy love story. With both halves of this beloved couple having been previously married, fans quickly fell for Matt and Alla as their divorcee love story blossomed. This sweet couple is still married and happy parents to infant daughter Emmalyn, Mark’s first and Alla’s second child.

Evelyn and David are not only still together, but they have seen success in individual television endeavors outside of the franchise as well. Evelyn went on to make the Top 14 on American Idol in 2019. The couple remains happily married.

Josh and Aika are another successful couple from season 5. The Arizona man and Filipina beauty married in Las Vegas and are currently still together. The couple enjoys a happy life together and appears in love. They do not appear to have started a family yet, which has been a point of discussion in the past for the couple.

Kalani and Asuelu are not only a happily married couple, but they share two sons together. The season 6 couple share two young boys and remain happily together after the show.

Despite being one of the most controversial and disliked couples in the franchise, Eric and Leida are still married. The couple received incredible backlash for their treatment of Eric’s daughter Tasha. Cops were involved in an altercation between the couple two years ago, but they still remain together.

Chantel and Pedro from season 4 are not only happily wed, but they have their own spin-off show. Season 2 of The Family Chantel concluded in December, and fans are still awaiting an anticipated renewal. Despite tensions with Chantel’s parents, the Dominican Republic native Pedro has gradually been accepted by the Atlanta native’s family.

David and Annie have overcome a lot of hardship to come out on top. The fan-favorite season 5 couple is not only still together, but enjoying happiness and success. David and Annie appear very much in love and have built successful careers for themselves through appearances in spin-off shows and other ventures. Their culinary skills even earned them their own spin-off.

Elizabeth and Andrei are a happy season 5 couple who saw their love story work out. Despite past struggles, the couple enjoyed an outdoor wedding and welcomed their daughter to the world on January 23, 2019. They are currently a happy family of three.

The young couple’s love story, fortunately, had a happy ending, as Steven and Olga have built a happy life together. Olga’s unexpected pregnancy resulted in the birth of their son, Richie. The couple has since stayed together and are currently residing in Steven’s native Maryland.

Season 7 also saw many of the couples receiving happy conclusions- at least as of now. Seven of the eight couples featured appear to still be wed and together. Although Sasha and Emily faced scrutiny from Emily’s sister, who was suspicious of the Russian’s two failed marriages, Emily and Sasha went on to marry. The couple enjoyed a beautiful ceremony in Emily’s native Oregon and currently reside together in Portland.

Nebraska native Anna and Turkey native Mursel are still happily together. They got married when Mursel was in the U.S. on his K-1 visa. The newlyweds are currently exploring married life together and are one of the season’s many success stories.

Tania and Syngin experienced tension when American Tania had to leave the country for a month-long business trip during their 90 days. However, this season 7 couple went on to wed and is currently still together. They recently welcomed their first child.

Robert and Anny’s international love story has a happy ending, as the couple is still together. After overcoming familial drama, the couple went on to lead a happily wedded life. They share infant daughter Brenda Aaliyah, who was born on July 28, 2020.

Rounding out the season 7 cast success stories is Angela and Michael. Angela recently made headlines for her slimmed-down appearance, and the couple is also doing well together. They will be celebrating their first wedding anniversary on January 27.

Michael and Juliana of season 7 raised fan concerns due to their age difference, but the American and his Brazilian beauty have defied critics. The couple is currently still together and happily married. The newlyweds have therefore proven their critics wrong.

Perhaps the odd-numbered seasons have produced the most successful relationship results. Blake and Jasmin are another season 7 couple that is still together. The California man and his Finnish wife are both married and still in love.

Season 7 couple Mike and Natalie are not only still together, but they are currently one of the couples featured on season 8 of 90 Day Fiancé. The season is currently airing on TLC and showing how the couple’s love story progresses. They even welcomed a fur baby together recently as rumors circulate about their love life.